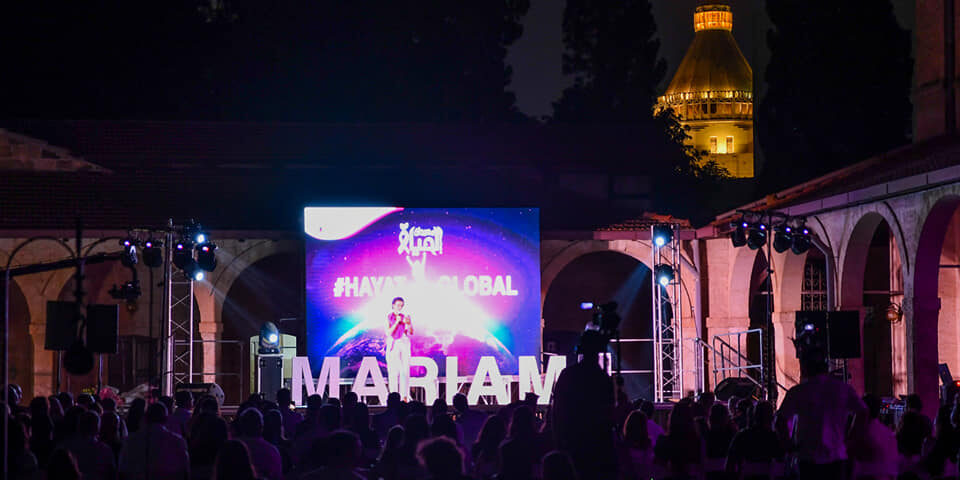 Mariam Foundation once again breaks all barriers and sends a clear message to cancer patients and to the whole world: Cancer does not mean death. There is life with and after cancer! In a very special event, Mariam Foundation honored cancer patients, our heroes, that beat cancer, who stood in front of the live crowd and whoever was watching the live broadcast to send the message of hope and life.

The event was hosted by media personality and Mariam Foundation’s member Ruba Warwar, who introduced the heroes to the stage in a very emotional opening sequence, that was followed by words from the CEO of Mariam Foundation’s Hamada Hamed who thanked everyone that came to the event and those who watched the broadcast, stressing the importance of the continuity of Hayat Festival despite everything else.

We were honored by the presence of Bishop Yousef Matta, who spoke about the social importance of Mariam Foundation and how we can support cancer patients through this kind of initiatives, and thanked Mariam Foundation for its work.

The event took place in the Don Guanella School in Nazareth, that became our second home that hosts many of our projects, and as a sign of gratitude, Mariam Foundation honored the school’s director Ft. Marco Riva for opening the school doors for us every time, and for his generous hospitality and support for our cause.

During the event, we contacted our ambassador from Gaza Eman Shannan live via Skype, who spoke about the special bond between us, and about our latest joint relief program that raised more than 520,000 Shekles for cancer medications for cancer patients in Gaza.

As always, we love to give our heroes the opportunity to speak what comes to their mind and share their feelings and journey with the audience, if they choose to do so. Bshara Rafidia, whom the foundation has supported for many years through his teen years, chose to come up to the stage to share his journey, and spoke about how important is it for the family to be beside their child during cancer. Afterwards, and in a very special gesture, Samar Batrice Laham, a cancer survivor, rose to the stage to share her story with cancer and how she overcome it, while reading a special note she prepared for the audience, describing her emotions and triumph over cancer.

Afterwards, and as a sign life, hope of victory over cancer, our beloved hero, Joul Abo Sinni rose to perform on drums for the audience, accompanied by his mentor Rami Harb.

Kids fighting cancer, are a very special kind of heroes, and to demonstrate their power and strength and hope to the world. Mariam Foundation partnered with the Augusta Victoria Hospital in a special music video produced by Mariam Foundation, starring kids who fight cancer, singing along and radiating life and hope to everyone else.

Joined us for this amazing evening was the talented singer Rania Ateek, who performed several songs for the audience and with the heroes on stage to signal hope and strength.

Finally, our talented Mariam Foundation member and doctor Rand Abboud performed an amazing dance act that depicted the struggle and triumph over cancer, and was followed by honoring each and every hero on the stage.